NSS Hindu College, Changanassery Affiliated to MG University,
Re-accredited by NAAC with "A" grade
Contact Us 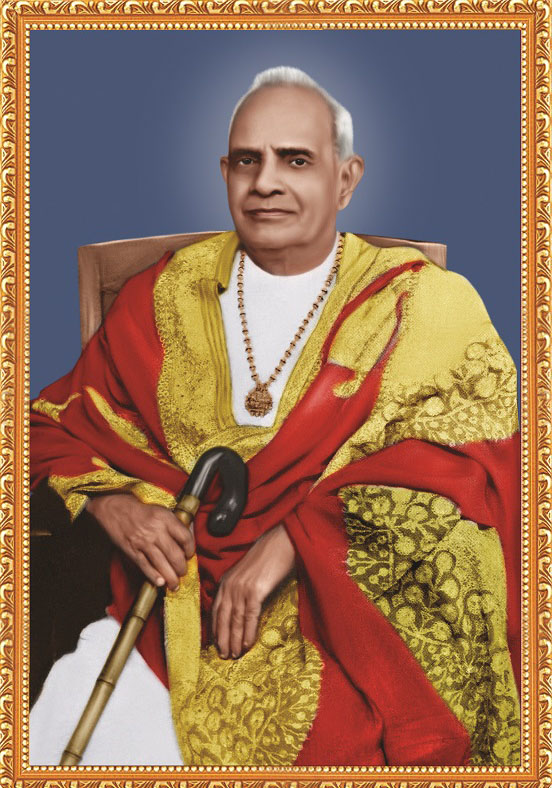 Our Founder, Sri Mannathu Padmanabhan instilled a sense of direction in the decadent Nair Community by organizing the people under the banner of Nair Service Society, a service organization equipped and committed to the cause of providing modern education, a positive outlook, a sense of purpose and a competitive edge. The educational institutions spread across the state bear testimony to his visionary zeal. He is remembered for the yeoman service he rendered to the state of Kerala and its people. His inspiration and guidance will always be with us. Sri. Mannath Padmanabhan was a legendary personality who dedicated his life to the upliftment of the people in Kerala in general and the Nairs in particular. He was born in Perunna, on 02 January 1878 AD, a small village in Kottayam district of Kerala. His father was Sri Easwaran Namboothiri of Nilamana illam and mother Smt Chiramuttathu Parvathy Amma. He became the Acharya of his community by dint of his ability, sincerity and perseverance.

Mannathu Padmanabhan started as a teacher in 1893 in Kanjirapally Government Primary School at the age of 16. In 1905, he started practicing law in Magistrates Courts and soon became a leading member of the Bar. Sri Mannathu Padmanabhan, a revolutionary thinker in his own right, along with thirteen of his close associates formed the Nair Service Society which has its headquarters in Perunna, Changanacherry. In 1914 "Nair Bhruthya Janasangham" was formed to organise and bring social reformation to the Nair community. In 1915 he gave up his lucrative practice and became full-time secretary of the Nair Service Society [Nair Bhruthya Janasangham] that had been started at his initiative. In 1924 he took part in the Vaikkom Sathyagraha [30-03-1924] and led the famous "Savarna Jadha" on 01-10-1924, an anti-untouchability agitation. On 1st of November 1929,  he participated in the famous "Guruvayoor Sathyagraham". On 30-07-1925, Nair Service Society was registered under the Indian Companies act.

Mannam became a member of the Indian National Congress in 1947 and took part in the Travancore State Congress agitation against Sir C.P Ramaswamy Iyers administration in general and his policy for an independent Travancore in particular. In 1949 Padmanabhan became a member of the Travancore Legislative Assembly. He became president of the Travancore Devaswom Board in 1950. He along with Sri R.Sankar, General Secretary of SNDP, initiated the Hindu Maha Mandalam. On 11-02-1950 Sri Mannam gave up his surname, stating that name should not be an indicator of caste. On 09-08-1959, the people of Kerala honoured him with the title "Bharatha Kesari" [Lion of India] for his outstanding and selfless social activities. He was also awarded the "Padmabhushan" in 26-01-1966, by the Government of India.

In 1959 he led the united opposition's 'Vimochana Samaram' against the State Communist Ministry which had become unpopular. This ultimately resulted in inviting President's rule to Kerala. This has made him the earliest leader in the world to bring down a Communist Government by public peaceful and democratic movement. All these years the Nair Service Society continued to reap the benefits of his constant attention and selfless service. It has now grown into a formidable organisation with a vast membership, substantial finances and various welfare activities. He dedicated his life in 1915, for the development of the Nair Community. He established, expanded and enriched the Nair Service Society and served the society as its Secretary for 31 years and as President for three years. Mannam Passed away on 25th February 1970.

Besides looking after NSS, Mannam wrote many books, an autobiography, and a travelogue, 'Our Trip to the Federal Malay States' [FMS]. His style was virile, forthright and very effective. He also set up many colleges, schools, hospitals and industrial units. His untiring efforts and well calculated moves have made the Nair Service Society an undisputed force to reckon with in the socio-political firmament of Kerala. His efforts in providing a lifeline to the once docile Nair community are indeed laudable. He was peerless in his achievements and has become an immense force and an inspiration to the people of Kerala and especially to the Nair community.